“Patriotism is the last refuge of a scoundrel” is the famous quote coined by Samuel Johnson which was interestingly written in 1775. It is interesting because it was written by someone who was certainly more conservative than not and certainly believed in church and state working in concert. (his level of political conservatism is debatable but it is probably fair to say he wasn’t uber liberal in any way). It is also interesting b/c it was written a year prior to the US declaration of independence.

In the symbolic sense most people associate patriotism with things like near universal reverence around the national anthem, hand on heart, pedestal for military, sacredness of the flag, belligerent defense and/or attack of national identity to both outsiders and “less patriotic” fellow citizens, wearing of clothing identifying nationality, celebration of national days, rabid support of national sporting teams in international competition, politician’s badge of honor with countries history and strong teaching of creeds in school.

Coming from a country like Australia, which ranks very low on the spectrum scale of patriotism I always identified what was most likely the true intention of that quote being the faux patriotism many clothe themselves with speaks more about the inadequacies of them rather than anything necessarily about their national (or organizational) affiliation. Interestingly many surveys rank Australians far higher in the patriotism scale but I wouldn’t strongly disagree with these as because of Australia’s general political apathy and ‘no worries’ mindset means that it might rank lowly on the political dissent scale.

However at the same time I am hardly the John Lennon “Imagine if there were no countries …” person either and see many positives in unique national identification and competition. Not the least for cuisine but also business innovation, the arts, unique travel destinations and experiences and a world defined by variety that its homogenous nature.

So the reason for that long intro stems from a recent article from the Wall Street Journal about the debate in New Zealand about changing their flag. New Zealand like Australia is not overtly patriotic, however there is far more pride in their unique national identity and their native Maori populace. It has a national anthem which is in two languages. It’s most famous and successful global sporting export, the national rugby team known as the “All Blacks” performs probably the most unique and passionate introduction by a national sporting team in any sport before every game. New Zealanders are also very self aware of their own nation’s history and proud of their own identity especially when compared or confused with their bigger brothers to the west, Australia. 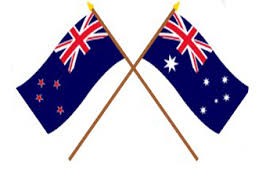 The two major problems New Zealanders have with their flag as you can see above is the lack of unique identifiers to their own country. They also look very similar to the other flag in the image belonging to Australia. Both flags have stars on one side of their flag which correspond to the Southern Cross star constellation visible from the Southern Hemisphere. (the Australian one includes an extra little star which the NZ one omits in the constellation). They both incorporate the Union Jack as a sign of affinity to their British Commonwealth roots. The blue background on both flags represents the water as they are both island nations. The additional star below the Union Jack on Australian flag represents the states and territories of Australia. So fundamentally the only difference people note who see the two flags is the red stars of New Zealand versus the white of Australia.

The Queen of England is still the figurative head of state of both countries as she still is in Canada whose flag contains no Union Jack. The reality is that neither nations flag represents the identity of the nations of Australia and New Zealand and as each year passes by this becomes ever more true. Both countries share a lot of commonalities with the US and Canada and to a lesser degree the Latin and South American nations. They are countries with longtime indigenous populations that were colonized originally by European nation(s) and are now nations of generations of immigrants that largely influenced the country they are today.

Now other than Canada and some Caribbean nations like Jamaica, Trinidad, etc. all of these nations have long or recently cut official ties with their colonial forefather. However all of them including still officially colonial nations like Canada and Jamaica all have a unique national flag. It is something that members of those nations both native and new can look to as a symbol of the community they have created and their unique value. It is both a historical record and guide for the future and ultimately without confusion represents them.

New Zealand having this national debate is great and I only wish Australia would follow suit. As a native born Australian and a child of immigrants, I have virtually no identification to our flag. Even the Southern Cross outside of being a unique constellation to the hemisphere doesn’t symbolize much about Australia. There is no national pride in identity in wearing something that looks like and does represents something else.

Australians who fought in both the World Wars under the Union Jack with Britain and still had “God save the King/Queen” as their national anthem and even were part of a time when pounds and shillings were the national currency may strongly differ. However that is exactly the point of why change is needed. I would argue despite its nominal founding of Federalism in 1901, Australia was virtually like Scotland or Northern Island as a territory of the United Kingdom until the 1960s when things like currency changed to the dollar, the currency changed to the dollar, the national anthem changed and the ‘White Australia’ policy was formerly repealed. Hell even Scotland and Wales have flags that are unique and differentiated to England and the wider UK, (the Union Jack of the UK is a combination of the flags of England, Scotland and Wales).

Anyway this has largely been a ramble but hopefully convinces more to push for change. 25-30% of the Australian populace today is foreign born. A further 20% of the population is second generation with at least one foreign born parent. That is virtually half the country of 23 million having a connection to a nation other than Australia. That is and always has been Australia, particularly since World War 2 when the country came into it’s own. It is this that is Australia and is this that should be embodied in the flag along with connection to the Aboriginal past.

If people are looking for inspiration look no further than the homegrown and world famous group, The Seekers and their song “I Am Australian”. Incidentally would make a better national anthem as well!