I have just finished an exhaustive biography on Walt Disney by Neal Gabler, and one of the many interesting perspectives you get from this comprehensive look at history is how the media and the media brands themselves have continually evolved. People today would generally look at a CBS, NBC/Universal, Newscorp/Fox and Disney itself and perceive them as permanent fixtures in our media landscape given their size and influence. The reality is very different and we are in the midst of a major disruption to the status quo as we speak ….

Coincidentally and interestingly for me there has been a lot of written word and broadcast media time spent in the last couple of weeks devoted to this very upheaval. Let us look at the preeminent brands in our traditional media landscape today;

Nearly everyone of those brands has gone through major ownership, structural, revenue or business focus change in the last 5 years and that rate of change is accelerating. This means a lot of them are busy fighting court battles with regulators and new competitors externally and internally within management teams & business lines, board members and activist investors.

To illustrate in the print world, the New York Times has unloaded some of its major old media assets like the Boston Globe and as of the 6 months ended in March 2013 has more digital subscribers than print. The Washington Post of course late in 2013 was sold to Amazon Founder and CEO, Jeff Bezos for $250M. Given his net worth is north of $35B, buying the Washington Post is less than 1% of that so shows how far the new media of the Internet has exceeded the brand that once brought down President Nixon. 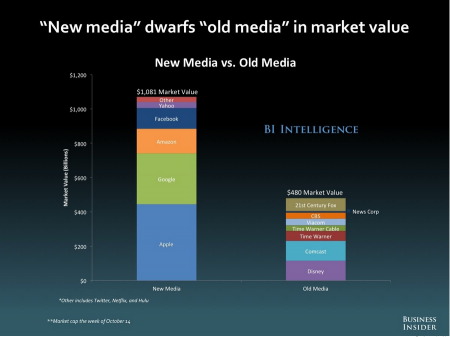 From the above chart you can see just how far the Internet generation of companies have come and now dwarf these iconic brands that still today control much of what we consume. The interesting thing is that two of the most polarizing old world media empires; Disney and Newscorp, were once themselves the disrupters destroying conventional wisdom and the social brand order as they were making their way.

In Disney’s case no-one believed in the 1920-30s that animation had any place in mainstream media. However first with higher quality then with sound, color, story & character development and finally movie length features, Disney destroyed conventional wisdom of the time and soon the other major studios of the time like Paramount and 20th Century Fox were scrambling to catch up. This continued with merchandising, a focus on all age family targeted programming and then harnessing the power of the new television medium in the 1950s when the other major studios shunned it initially as beneath them.

Today when Disney is mentioned to modern entrepreneurs it usually reviles a sense of hatred as a company that stands for everything that is wrong with corporate America and the media today. Disney has fought and lobbied successfully over the years to lengthen Copyright periods to what is derisively known as the Mickey Mouse Protection Act. This means as it stands any work created on or after 1923 still has protection up until 2019 at least when they were due to expire starting in 1998 and go into the public domain. It also has long been critiqued for promoting through film, tv, news and print a version of the US that is evermore far from the reality of the racially, ethnically, religiously and culturally diverse nature of the US that exists today.

Well in 2014 we now have a whole range of new media companies appearing on the web and mobile that are fast becoming our primary source of information and media.

The interesting thing is most of these companies didn’t start out partially or even at all to be a competitor to media companies like Disney, Fox or the New York Times. However as their reach grew and their share of eyeballs, advertising dollars and ultimately consumer behaviors inclined towards their products, they became not only competitors of the traditional media brands but the companies that could ultimately destroy them.

This is the common story of all disruption and why unless any company is not looking forward regardless of its current standing, its best days will always be behind it. So many of the brands I mention above could be the media barons of tomorrow and depending on the way they do “journalism”, that will be our information future