There are approximately only about 50 days left in Mayor Michael Bloomberg’s long 12 year, 3 term stint as New York City’s Mayor as on January 1 after the past week’s election our new mayor will be a progressive Democrat Bill de Blasio. In many ways a position as New York City’s mayor puts you on the National and even International stage just because of the power of New York City in global affairs from finance to pop culture. Therefore when a powerful figure leaves office the ripple effects can be profound.

New York City’s metro population is bigger than 39 of the 50 states and represents 8% of the entire US economy despite it only being 2.5% of the US population and occupying only 0.01% of the entire United States landmass. Its economy of 1.3T is bigger than all but 12 countries in the world not including the US. It is the home of the United Nations and there is no city in the world that is more featured in TV shows, movies, songs, t-shirts and residences of the rich and powerful. Therefore the Mayor of New York occupies a position unique in the world for such a humble position in the political spectrum of power.

Bloomberg followed two other celebrity like NYC Mayors in recent times in Republican Rudy Giuliani and Democrat Ed Koch (there was another Democrat in between those two who wasn’t quite so memorable). The common thread to all 3 was certainly not their politics but the fact they left such a profound legacy effect on the city still felt today and their very names can cause heated debates both in New York and around the country.

Every politician has a shelf life and term limits are a great thing as there is nothing worse than stale ideas, establishment thinking and policies and of course the larger propensity for corruption that go with career politicians. Washington DC is the great example for this although at the same time electing unqualified morons has a price too as we see all too often. However personally I will be sad to see Bloomberg go and not just because he did wonders for the growth of the NYC tech industry and happens to live on my street.

Money and politics is more often than not a problem but in Bloomberg’s case it actually allowed something which I think Americans on both side of the political aisle crave being a 3rd party (or more than 2) candidate. Bloomberg, originally from Boston, and founder of a company sharing his name which is synonymous in both finance and the media, created a multi billion dollar empire which is estimated to have earned him a net worth of around $31B.

Another famous political candidate of that type of mega wealth in recent times was conservative leaning Ross Perot from Texas who emerged as close to a viable 3rd party presidential candidate since Teddy Roosevelt and the Bull Moose Party in the early 20th century. Perot was so successful that he garnered enough support to be included in the televised presidential debates with incumbent president George H. W. Bush and then Governor of Arkansas and Democratic challenger Bill Clinton in 1992. He won 19% of the popular vote which is about 20m votes (although no states outright), was said in post polling to garner 38% each of his votes from both his major party opponents, won support across the country unlike many other 3rd party candidates and given the margin of victory was 5.5% or about 6m votes for Clinton over Bush, it is not unfair to say that he cost Bush the election.

Bloomberg originally a lifelong Democrat switched to being a Republican in 2001 to avoid primary challenges (NYC registered voters heavily skew to the Democrats) and earned the endorsement of out going Republican mayor Rudy Giuliani who was riding in high in popularity and fame following his response to the recent 9/11 attacks that year that end up winning him Time Person of the Year. He later switched to an Independent midway through his second term in 2007 with a view that he wanted to get the laws change to allow him to run for a 3rd term and knowing that would and was not taken to kindly by the establishments of either major political party. It may seem cynical and opportunist but the reality was Bloomberg was always an independent candidate and his vast net worth allowed to run as a candidate that both strongly appealed to and reviled both sides. Few figures, if any, in the US are able to do this and be elected let alone re-elected.

Now while I say I will miss Bloomberg as Mayor doesn’t mean I agreed with a lot of what he wanted to implement, especially some of the more recent social policies. Bloomberg after looking at his record is an Independent who is socially liberal, fiscally conservative but not in the libertarian sense as he does believe government action is needed to achieve both results. In terms of things a lot of NYers and certainly I won’t miss him promoting or regret that it was implemented include;

Interestingly with each of these initiatives my near term personal selfish thoughts are actually contradictory to the fact I am strongly against the action he took.

However if you leave aside what I believe is the misguided policies above, the goal intent of each is largely laudable. The soda and cigarette bans are based on the desire to improve public health and stop and frisk is based on reducing crime and continuing NY’s position as the safest large city in the country. The 3rd term while a little more ambiguous allowed the Bloomberg administration to complete some important major projects in the city that will leave a lasting legacy for decades including; 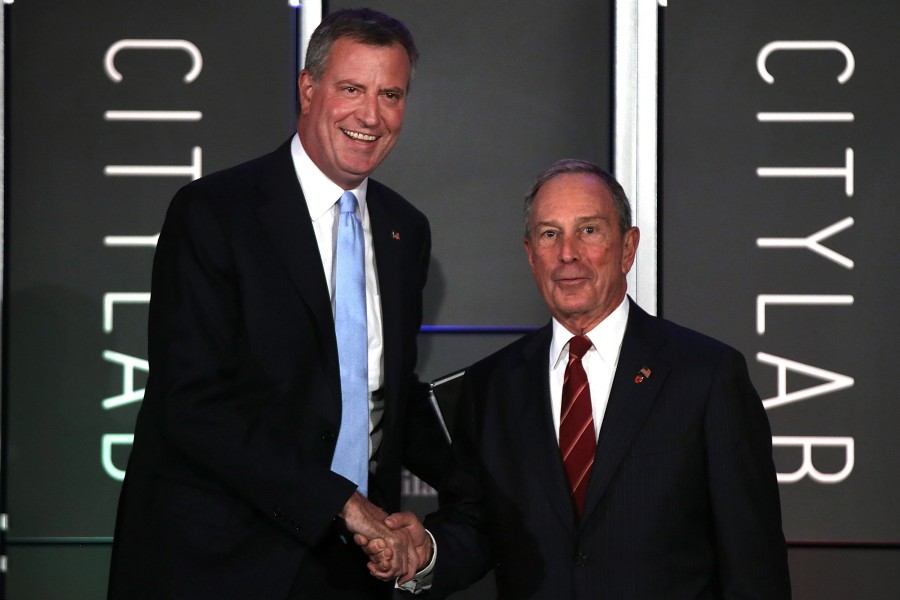 Mayor elect de Blasio has some figuratively big shoes to full although he seems like he is about double the height of Michael Bloomberg. He certainly seems like he will address some issues that need attention like Pre-K learning, the growing divide between the top end of NY and the middle class, rent levels, focus on boroughs outside of Manhattan and finally dealing with Penn Station infrastructure. However de Blasio is far more partisan and far less pragmatic seemingly than Bloomberg (so was his Republican opponent and most of the candidates for Mayor). Therefore policies put in place to assuage mostly his side of the political world (even though that is the dominant force of NY) will in the medium term cause problems for all.

I actually sat next to Bill de Blasio in June to have a haircut and his hairdresser at the end wanted to have a photo with him and he seemed like a very friendly and decent person. Incidentally I thought at the time why bother as he was running 4th in the Democratic primary at the time with little hope at least I thought of being Mayor. However missteps from other candidates, successfully tapping into underlying fears of left leaning NYers, a charismatic and multi ethnic family, better insights into his past successes like running Hilary Clinton’s 2000 NY Senate campaign and general clever campaigning on his part and we have a new mayor that won by over 50% which is astonishing in any fair political race of this size.

However when I hear, albeit via 3rd party sources in the media, that he wants to regulate the new economy and players like Airbnb and Uber to protect the union workers in those industries I get very concerned and that current curriculum at CUNY is a great place for our knowledge economy today. That sounds like an old school 1960-70s progressive politician who as a group while did a lot for civil rights, failed badly at economic management, the rise of the urban slums and corresponding crime rates and ultimately forward thinking to place their cities and country at the forefront of innovation. I hope I am proved wrong because he seems like a commanding figure and one whom any form of hubris at this point seems not to be an issue.

Ultimately New York and the nation will continually to feel the effects of the Bloomberg’s mayoral administration for decades to come and no doubt he will continue to lobby on the national and international stages for the causes he believes in. He already said he will follow the George W. Bush doctrine of not criticizing his successor which I think is great and allowing him to govern to his vision and shows statesmanship. I do have a funny feeling though many a NYer in the years to come even if they don’t admit it will be miss (even it just at certain moments or political events) the strong and sure guiding hand of Michael Bloomberg.