The land of liberty, the bastion of free enterprise, the evangelist of freedom and the country that loves most to identify itself most with libertarian values is so often a contradiction to those of us that call it home. Gambling is one of those contradictions with the US having one of the most restrictive policies towards gambling in the democratic world.

Gambling in the US is regulated both at the State and Federal level and for the most part until very recently the two major forms of gambling that were legal, are Casinos in the states and cities that allow them and betting at horse racing tracks and where allowed, authorized Off Track Betting (OTB) centers. There is also lottery and gaming tickets but that is a far more passive form of gaming.

So in the US the types of gambling that are prohibited include;

In most other western countries, like the UK and Australia, most if not all of the above is legal, strictly regulated and taxed so a significant source of revenue for governments. Now one could argue the morality of gambling but firstly in a free society shouldn’t adults be free to do as they choose. If a democratic society votes to ban gambling as a vice that is seen to be destructive to society in the same way that heroin is illegal then how can they at the same time allow some forms of gambling like Casinos to them remain legal. 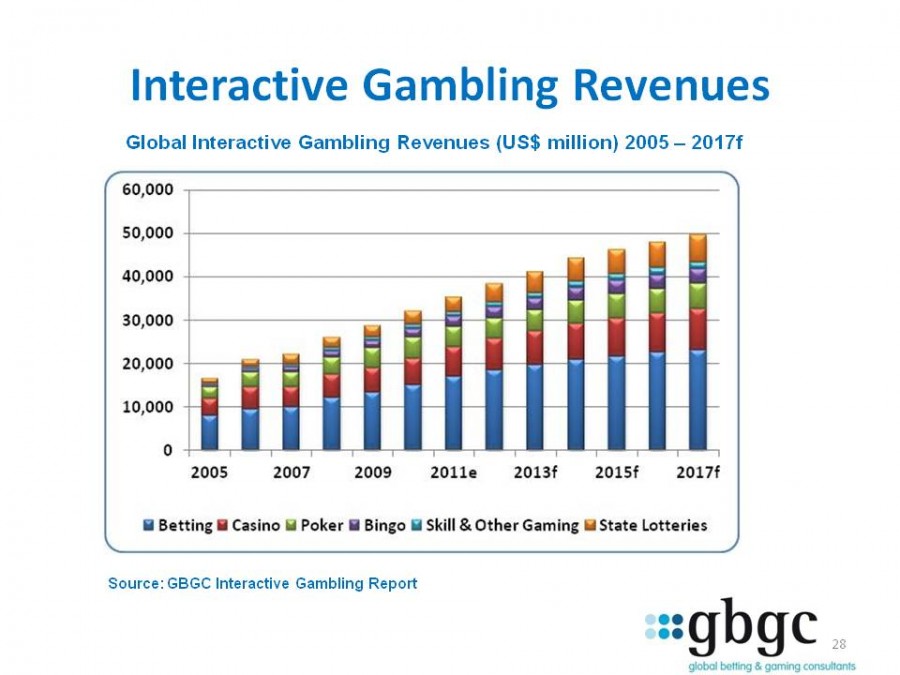 The reality is there powerful forces in play in the US from the mega casino magnates like Sheldon Adelson (notable also for bankrolling the Newt Gingrich 2012 Presidential run) to the conservative religious and family values groups who are all opposed for different reasons to online gaming. Adelson wants to maintain his strangehold on the US gaming market and doesn’t wasn’t new competition and innovation to come via the online gaming arenas and the conservative social groups just don’t want gambling period.

However State Governments around the country are suffering with major budget shortfalls combined with a younger and more liberal socially minded electorate. So taxing gambling earnings from businesses and consumers is seen as a safe political route to gain more revenues as doesn’t involve introducing new taxes or increasing current levels and profits from an industry that most people don’t feel sorry for if they freely choose to engage. Additionally most people are aware there is an underground market for most of this type of gaming anyway, along with roundabout access to foreign vendors who provide betting services, so government regulating this existing behavior could actually make the practice safer for all and direct revenues to people within their state.

Already in the last 12 months, New Jersey, Maryland and Delaware have voted to approve online gambling at least as it relates to Casino gaming. Companies from Virgin to Tropicana in New Jersey have already commenced or are about to offer real money online gambling for casino gaming. When neighboring states realize that their citizens who want to gamble online or on mobile are finding ways to try and win money online then they will no doubt follow suit much like the legalization of marijuana around the US. States will want to ensure they are keeping the revenue they can earn from their own citizens.

Now whether this will eventually lead to allowance of gambling of sporting events and other things like political races only time will tell. There is a very good argument to be made particularly in the financial and political arenas that allowing gambling will dramatically increase the chances of corruption and fraud in areas of society that are crucial not just to the health of the US but the entire world. This also applies to sport where in India, betting corruption over the last 20 years has dramatically damaged sports like cricket with hundreds of millions of dollars at stake..

However the reality is big money interests can already bet on US political races and financial markets with International vendors. Also the US already has some of the most sophisticated financial controls to monitor unusual movements of money for national security reasons. Also in the sporting arena it is vigilant to stop betting scandals like that which hit Major League Baseball early in the 20th century and the Chicago White Sox.

Ultimately I think that the US is certainly right to begin to allow online gaming and I think should go further to allow betting on sporting events given this already happens with Horse Racing. This will be a major source of revenue for both Federal and State Governments around the country and bring this entire world up from under the shadows to make it safer and regulated. Other countries direct portions of this tax revenue to Gambling support lines and regulations limiting single session betting amounts, ID verification and ensuring businesses send tax documents to the IRS will ensure this will be a far safer world than it is today.

Having lived in countries where this is allowed and having casually gambled online with those vendors from time to time, it is truly a harmless activity for most people. In a truly free society people should be allowed to spend their money how they choose as adults as long it doesn’t harm another person. Online gambling meets that criteria.