I was recently participating at an Industry Roundtable event discussing the future of SEM (Search Engine Marketing) & SEO (Search Engine Optimization), Google and where digital buying is headed in 2014. The interesting thing I have found in doing these type of panels is that we often get lost in the details and micro changes but miss the larger macro changes that end up dramatically changing the industry.

Back in 2009 into 2010, working with a lot with advertisers who spend millions in SEM we saw an intriguing trend that really wasn’t surprising that it was happening more the dramatic acceleration of growth. In 2007, the original iPhone launched and the modern smartphone was born and then in 2010, the original iPad launched and the modern tablet took off.

Advertisers for their paid click traffic in aggregate in 2008 had maybe 1% of their traffic coming from mobile. This went to around 2.5% in 2009 and then went to about 10% in 2010. That is the definition of hockey stick growth and along with mere adoption rates of smartphones and tablets from Apple’s iPhone & iPad to Android offering from Samsung, HTC and Amazon you knew your were in the midst of macro shift in the world.

So while folks are discussing Google Search algorithm changes like Panda or Penguin, PLA (Product Listing Ads), CPC inflation and the death of SEO at these events, something I raised is what I believe is more transcendent in how we view actually operate in society and thus the company, technology and behaviors of the medium term future that will change and win out.

The research which comes from Macquarie Securities and which you can read here, says that for first time since they tracked the data and a reasonable inference would be since the history of search given the growth of the internet and the way we discover information, that total searches whether desktop or mobile declined.

Well search is the defacto standard of how we all as in individuals and in all professions research, discover and educate ourselves. Whether it is what restaurant to go to, learning more about World War 2, what is the cheapest deal on a trip to Paris or looking up something we just saw on TV. It is so much a part of life that “googling something” is acceptable vernacular and individuals and business alike use it as our first port of call to begin or verify a fact.

Now even as more people are coming online and mobile devices are allowing us to have closer to 24/7 access to cyberspace, we are now actually searching less on Google. With the advent of mobile apps & app stores, wearable technologies, voice based search, etc., the humble search engine and text box may have seen its peak and newer methods of information discovery are ahead.

Many people might say if that plays out over the next few years, that is doom for Google. You would do well to note that Google has a major stake in mobile apps, wearable technologies and voice based search along with other futuristic technologies.

Google in an interview with Bloomberg revealed that 15% of searches they see each day (or approximately 500m searches) they have never seen before. Now it should be noted in 2007 this was apparently between 20-25% however with tools like Google Auto Complete that might have influenced a lot of people to search in a more uniform manner along with just the maturation of the internet.

Regardless it means that just basing your advertising, analysis, predictions on past information from Google search data by its very nature it will be flawed. Then the older that data it becomes the less real value it has. This is important to think about in a world where Google no longer passes search referrer data to 3rd party or indeed its own analytic tools (Google AdWords and for 90 Days Google Webmaster Tools aside) which has made it very difficult for digital properties to do SEO and write articles based on what people are searching.

However when you take Trends 1 and 2 together it presents a world that is constantly refreshing and that language and the things that we value and are popular are evolving at a rapid rate.

Flurry the mobile analytics company which outside of Google and Apple probably has the greatest treasure trove of data on mobile device usage. According to them in 2013, 80% of our time was spent in Mobile Apps versus only 20% spent on the Mobile Web. This is up from closer to 70% a year earlier for App time spent versus Mobile Web. 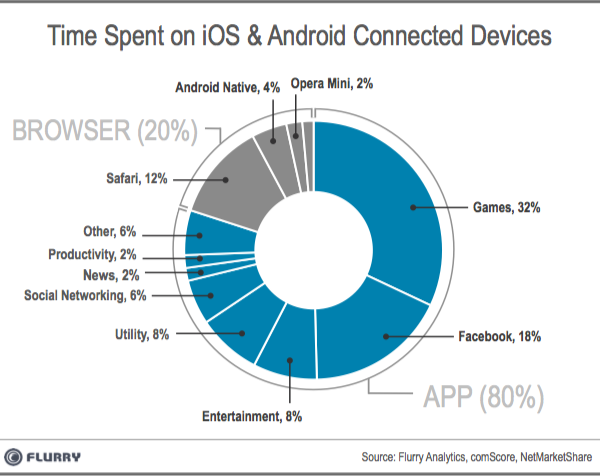 If you think about Trend 1 again that searches are beginning to decline, and that in a web browser world searching along with social networking (and probably gaming, porn & videos), are the most common activities with Google the major beneficiary. Well if today are going direct to the Yelp App for restaurants or the Expedia App for travel or the Wikipedia App for information then suddenly we may have entered a world where the need for Google Search is bypassed. We may even go direct to the Google Maps app then go via a Google Search or even the Google Search App.

Ultimately this all points to world that is a major state of flux. It is not that the end destination of these trends is necessarily as apparent as it may first seam. However there is a larger behavioral shift happening across the globe, along with many parts of the developing world bypassing the desktop paradigm entirely, and the company brands and technologies that position itself for these macro trends will ultimately define what the future largely looks like. In general companies like Google & Amazon seem to be leading the way …. or so it seems ….